Today, I’m sharing what I’ve just uncovered to be one of the biggest shifts of our time.

I’m about to show you how the richest and the smartest investors are transitioning away from using gold or cash as their primary store of wealth.

A society is only as strong as its Power to protect its own Wealth.

While the source of wealth changes over time, one thing does not. Predatory violence. 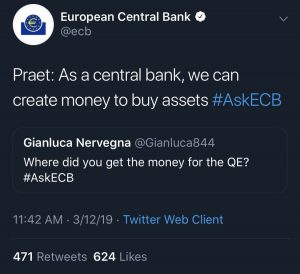 As William Playfair wrote, “Power has always sought the readiest road to wealth, by attacking those who were in possession of it.”

The power to control the distribution of assets and income is as close to being a predator in this economy.

When the Europeans discovered that Cowry shells were used as money in parts of Africa and the Indian ocean, they simply introduced more of it and took control of their economy.

Polymath, Nick Szabo talks about this at length in his blog Unenumerated.

According to the European Central Bank’s Chief Economist Peter Praet, they’re bestowed power from governments to simply print money out of thin air!

Yes! We all know what central banks have been doing for decades, but the fact that they are comfortable enough to brag about it so nonchalantly on Twitter and not causing a massive riot in the streets shows a dumbing down of society.

Who can forget the science fiction film Idiocracy (2005) where it portrays the U.S. as a greatly dumbed-down society 500 years into the future.

Is our quest for more ‘money’ making us blinder or stupider?

You chase money every single day.
You stress over money your entire life.
You worship money.

But you have no idea why money is valuable.

Money/Debt controls your life because you have no understanding of what it is.

Once you ask yourself “What is money?”, everything will begin to make sense.

Now you will begin to question the authorities.

Here are the dark secrets of fiat money simplified:

When central banks and governments decide to simply print more money, they are stealing wealth from majority of the population and enriching the top of this elaborate pyramid scheme.

According to the IMF themselves, inflation is one of the leading causes of income inequality in the world.

The citizens of a country who store their wealth in cash (living paycheck to paycheck) have their wealth devalued away over time.

The citizens who don’t have inflation-adjusted wage contracts continue to get paid the same dollar amount year after year, even though their purchasing power is eroding annually. And lastly, inflation leads to rising prices for real assets (real estate, etc), which are owned by the elites generally.

If this isn’t hyper inflation in luxury real estate, what is? pic.twitter.com/ceBysYiwGI

Inflation has all the telltale signs of a win-win game for ‘them‘, not for the vast majority of people. They have us convince that the economy is for the benefit of the whole, but in grim reality; some more than others.

Today, that cost have far outweighed the benefits.

We’re bailing out banks in the billions.

Banks are treating millions of dollars of fine as their cost of doing business.

Governments are bloated with administrative “watchers” to keep the middle-management in check. As a result, they’re saturated with rent-seeking opportunists.

Cronyism and corruption becomes the staple diet of politicians instead of adding, building and creating value for the whole economy.

One of the leading signs of hyper-inflation is the obscene value of a handful of football players and the transfer cost. 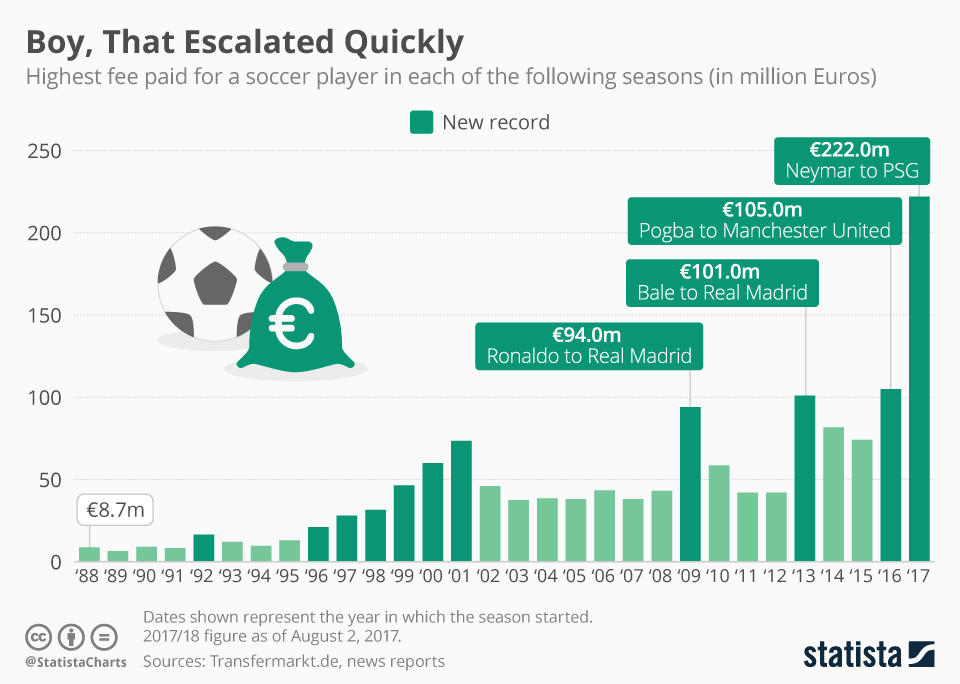 So when central banks say “we can create money to buy assets,” what they are really saying is “we create money out of thin air, the wealthy benefit greatly, and the common man or woman gets screwed!”

Central banks may be able to print more fiat dollars, but eventually the Ponzi scheme will end.

When it does, Bitcoin will be there, as scarce as ever, with the inability for anyone to print more.

As the IMF said in their 1998 paper on inflation and wealth inequality, “There are no medium- or long-term income inequality costs of disinflation, only benefits.”

Those who understand this fact, and are able to face the truth will be able to see money in a renewed perspective.

Don’t listen to anyone, just look at what they do.

Governments all over the world are furiously buying up billions of dollars worth of gold while they continue printing political money out of thin air.

AT THE END OF THE DAY: Bitcoin’s scarcity and utility will prove to be an even better value proposition than Gold to a growing population of Digital Citizens.

Another symptom of the fiat economy is the prevalence of get rich quick mentality.

Investment & Trading experts like to dress themselves up lavishly on Instagram, displaying their wads of cash to impress upon the common man.

They always appear smart and brilliant on the art of making money using their magical charts or crystal balls.

Now, I’m not saying that trading is evil… it’s not.

The free market relies on trading to pair up buyers and sellers of bitcoin in a dollar-centric economy.

Before Bitcoin can be considered a unit of reference, the market needs to find its price based on the available demand.

And Bitcoin is fixed at 21 million btc (units).

Over the years my most profitable trades have been produced by HOLDING, not by active trading.

Trying to make more money by adding more 1s and 0s to your bank accounts is only logical right?

That’s what the speculators did with Bitcoin in order to make quick money.

Greed makes us blind and ignorant.

When people started buying and selling to make more fiat money (available in abundance) instead of accumulating their share of something incredibly (scarce) like gold, they forfeit their ability to hold on to Real wealth.

Throughout history, many of the frightened people who were convinced by authorities that the world would end, and that apocalypse was coming, gave their lands to the Church.

In the end, it gave rise to the saying that “only a poor man sells land.”

And the Church became the largest landowners in history.

The same holds true when the authorities took us off the gold standard.

Today, banks use the power to print money to manipulate, influence or suppress “free market” prices of Gold and Silver.

Markets always place the greatest pressures on the weakest holders. And so it’s relatively easy to remove assets from weak hands.

What i’m saying is that over the decades to come, the rich, the billionaires, and the majority of investment banks we know today will definitely find Bitcoin to be a very attractive asset to accumulate.

They have truck loads of cash, not to mention the ability to print more just to buy incredibly scarce assets like Bitcoin.

What makes Bitcoin so attractive for the digital age? Scarcity and utility.

Bitcoin is more than just a speculative asset for the visionary.

Tim Draper said: Bitcoin will inevitably weather its share of ups and downs ― like all great inventions do. But the market will relentlessly move forward.

While fiat currency will still remain in circulation as a medium of exchange for the poorer masses and the indebted, the real stores of wealth like Bitcoin will skyrocket in value in the years to come.

The average person will always be concerned how much money they own in terms of ($$$) dollar signs, and they’ll sell as soon as they’re happy with the profit.

Smart investors on the other hand will accumulate bitcoin like they hoard land titles.

Don’t let the authorities fool you into believing that the dollar will remain a global standard of value for years to come.

The USD is going to turn into monopoly money faster than you will realize.

Countries like Russia and China are already moving away from the currency because the U.S. have shown they’re wiling to weaponize the financial system for their own political gain.

A demand for a global, neutral settlement like Bitcoin will grow more appealing in the decades to come.

Most children will succumb midway and eat the cookie immediately,
Some could wait 10 minutes,
Few in actual reality can wait even longer. (As you can see Hodling Bitcoin isn’t easy.)

Kids who succumbed quickly to temptation is associated with poorer traits than those who are high-delayers.

In essence: Long-term time preference is the true root of highly intelligent investors.

Short term market setbacks do not unnerve long-term investors the way they do people with short-term, day trader mindsets.

Marc Andreessen: In 20 years, we’ll talk about Bitcoin like we talk about the Internet today. He doesn’t invest in things that only last for only a few years.

Bitcoin Will Replace Gold Within 20 Years

Co-founder and CEO of Block.one, Brendan Blumer writes: “Over the next two decades, Bitcoin will replace gold as the leading commodity to store value”

He adds, “Bitcoin won’t scale because it doesn’t need to.” This is in regards to bitcoin’s layer on top of the Bitcoin blockchain called the Lightning Network where the majority of the micro transactions like “buying your everyday coffee” can take place without congesting the network.

“Most of the activity will flow to scalable layer-two solutions, but Bitcoin’s awareness and liquidity will continue to compound,” he explains.

His conclusion echoes Microsoft’s report that found that scaling on-chain like Bitcoin Cash degrades the decentralized state of the network and still unable to reach the millions of transactions per second globally.

He isn’t the only one stating this fact. 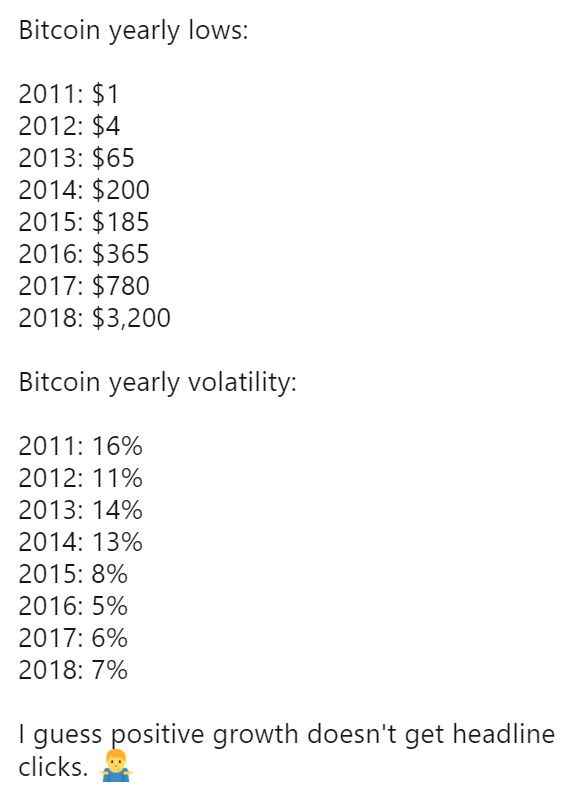 Earlier in the year, the Winklevoss twins stated that they believe “bitcoin is better at being gold than gold.”

You see, the problem with gold is that they’re highly co-opted by governments, hard to secure and repatriate – as some countries like Australia and Venezuela are experiencing today.

Max Keiser, a bitcoin bull and an ex-Wall Street veteran predicts Bitcoin to be the first peer-to-peer gold.

He used to be a skeptic, criticizing bitcoin for years, but now he’s a believer. “It’s not certain, but possible, that Bitcoin will be the standard for money transfers,” Faber said.

Jack Dorsey the CEO of Twitter, is currently the most staunch supporter for Bitcoin. He expects that bitcoin will be the internet’s native currency.

Even Elon Musk holds some bitcoin in his wallet. He calls Bitcoin ‘Brilliant’, better than paper money for value transfer in a recent interview.

That said, I still only own 0.25 BTC, which a friend sent me several years ago. Don’t have any crypto holdings.

What I hope you’ll see is that Bitcoin isn’t designed by Satoshi Nakamoto to make you more money.

For starters, if you try to dig deeper to understand bitcoin more intimately, you’ll begin to realize that native internet currencies like bitcoin are inevitable.

Storing your wealth and keeping it out of reach by predatory governments and criminals is a highly attractive value proposition.

It’s easier to protect your bitcoin against confiscation. (For example, using the Ledger Nano S wallet like a “brain wallet” to secure your bitcoin)

It will ultimately supersede fiat money issued by governments.

Soon fiat currencies will only be used by the poor who will also be the only victims of inflation.

How to Buy Bitcoin (Satoshis*)

Should you come out convinced that bitcoin is something worth owning, your first investment should not be in buying bitcoins, but in time spent understanding how to buy, store and own bitcoins securely.

It is the inherent nature of Bitcoin that such knowledge cannot be delegated or outsourced to anyone.

To get your hands on some Satoshis,

SEC sues ICO for Fake Approval and Impersonating the agency

Cryptocurrency Regulations Might Delay for next 2 Years in UK

SEC sues ICO for Fake Approval and Impersonating the agency